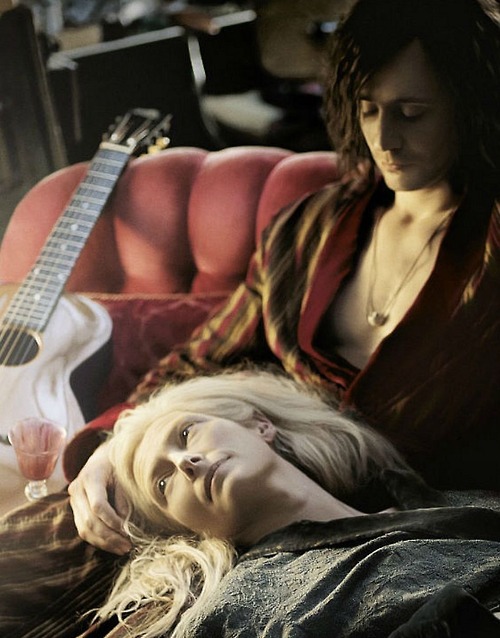 Last night I went and saw Only Lovers Left Alive with Darrah.  It was playing, as far as we could tell, only one week, Mon-Thur, two shows a night, at different times each night. At a theater inconvenient to most anyone who would probably be interested in it.  If they could even discover it was playing.  7pm on Thursday and the audience was the two of us, a solitary fangirl (I saw you, ma’am and recognized what you are), and two 50s-ish guys.  I mean I guess the theater can argue the limited run was for lack of interest but, c’mon, Nashville.  Why wasn’t this at the Belcourt,and publicized, like at all?

Still I’m grateful we saw it the theater, and in a quiet theater no less, because it was amazing.  I couldn’t watch the first couple minutes, where everything was spinning.  Too vertigo-y for my delicate brain constitution, but the rest of it was fucking perfect.

I want to crawl inside this movie and live forever. I over identified with Adam’s character, so crawling inside it obviously means Tilda Swinton would be my wife, which is all I’ve ever wanted out of the world. But there’s more reasons than that.  My coworker asked what it was about this morning, and I said, “it was vampire movie, but if I had to use single words to describe it they would be: soft, comfortable, calm and romantic.”  There really wasn’t angst and suffering in OLLA, just a little irritation and exasperation. And of course, the vampire thing.  I started reading Anne Rice and Chelsea Quinn Yarbro when I was 14 or 15.  Yep the vampire thing is kind of over played in pop culture now, but it will always be a huge part of  my emotional and intellectual upbringing.  OLLA was the vampire movie of my goth teenager dreams.  It filled me with the same calm wonder as discovering the Romantic poets did, or finding The Chameleons UK and feeling like someone else really understood my inner world.

The pacing of the movie was oddly relaxing.  There was no real sense of urgency in it, even when people were hurrying to do things. There was tension, but it never felt scary or anxiety inducing.  There was just this pervading sense that whatever came could be handled, somehow.  Which is perfect, if you’ve lived forever and been through everything, sure this too shall pass, you  know it will.  The film was also very much a snap shot. No long flashbacks, only casual discussion of their long past together.  Just here, right now, a small window into a long long life. And everything was left to be inferred.  There was no explanation for vampirism or powers or anything, it was just a given you’d know some parts and figure out others.

And of course now all I want to do is go shop for just the right white leather jacket.  I mean if I can’t marry Tilda Swinton can I at least please be super cool like her?

I left the theater feeling both calmed and utterly delighted.  I want to write stories like this.  Stories that are merely a slice of life, a small window of a larger tale, but still utterly engaging and interesting. Stories that lack complicated plots but are rich and detailed with character, scene, setting and tone.

I totally recommend OLLA, but watch it undistracted, so you can live in it while it unfolds.