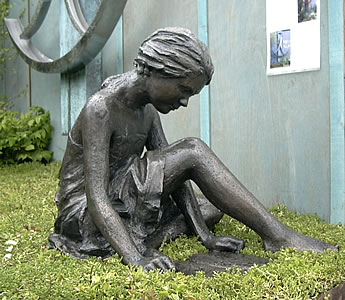 Had a lovely, lovely weekend.  Went to the Tomato Festival with Queen Mab (Queen of the fairies, who is not so tiny anymore) and her parents henceforth known as the Queen Mother and Haiku King because her mother looks like a fairy queen as well and her father–formerly Chef Daddy–is no longer a chef and won the Tomato haiku contest.  Grand champion, best in show of over 400 hundred entries, so that was pretty exciting.  I managed to only miss one little spot with the sunscreen and didn’t really get burned.  We had surprisingly delicious tomatillo and basil ice cream and ran into lots of neighborhood folks.

I confess that I never got dressed on Sunday.  As evidenced from yesterday’s post I spent the while day watching the first season of True Blood.  I did laundry, cooked, polished some boots, worked on some sewing projects, sorted out jewelry supplies and tidied up a bit (before I messed it all up again).  So the day wasn’t a complete loss.

Today I ran lots of errands, built myself a macro photo studio.  I need to get different lights as the ones I’d planned to use aren’t bright enough.  Kind of sucks because I probably could have found something at Target today, but alas I didn’t know until I’d already gotten home.  I paid bills, made a healthy dinner and went to yoga with the Queen Mother.  Now as a reward for my virtuous living I will spend the night on the couch watching more True Blood and eating chocolate covered dried cherries.

I’d feel bad about “undoing” all my good work, except that on Saturday I put on skirt I haven’t worn in quite a while and it was HUGE.  This is skirt that I let the waist out on by 2 inches before I went to Spain a few years ago.  Now it doesn’t even stay up.  So my choices clearly are to take the skirt back in a couple inches or eat chocolate cherries until it fits. Hmmmm.

Yesterday’s storm seemed filled with crazy horizontal lightning. We were watching it out the restaurant windows and commenting how odd it looked. There’s pictures here and here. Crazy, crazy lightning.

I had lunch today with pretty baby Queen Mab (who is getting so big, three months old!!) and her gorgeous grandmother today. Such a lovely time. I need to remember to make time for such good company more often. And to see little Queen Mab more often, she’s getting big so fast and she’s so pretty and even tempered. Baby cuddling is by far better than therapy. I should have brought my camera. Next time.

I am working very, very hard to give myself the month of June off. Of course I still have to work at the restaurant, still have to go to the dentist, still have fret over MPMD moving away at the end of the month, but I am trying not to worry about HCT or any of my other projects. Just to breathe and relax and figure out the other things I need/want to do. Not that it matters. I’m still stressing over not getting enough done, and now additionally angry with myself for stressing when I’m not supposed to be. I might do better if I just stopped opening my inbox. The 122 unread/un-dealt with emails are getting to be a little intimidating. I swear, I’m only telling you about it so I can let it go. *deep breaths*

Another small trip to the dentist today. They really are nice, but I can’t seem to leave there without a headache. I except it’s psychosomatic. I am going to go lie down. Somebody send handsome young men to put a cool cloth on my forehead and bring me a cheese burger and deep fried pickles when I get hungry.

Last night I had a continuous string of dreams about being stuck somewhere or trying to get somewhere or being lost. Stress, stress, stressy stresserson. Bleh.  The only good part was small bit where tiny Queen Mab was already walking, talking and incredibly smart.  Everyone was shocked she could do these things so young, but she was just ready to go and be part of the world.

Yesterday was Libelle’s birthday.  I hope she had a good day, I did what I could.  Of I’d like to draw it out as much as possible, as April is BIRTHDAY MONTH. What with Libelle’s at the begining and mine at the end, I declare it a month of celebration.  Hurrah!!

Now we have bacon and coffee.  Well and quiche, but that just there so I won’t have eaten just bacon and nothing else. Let the celebrating continue!