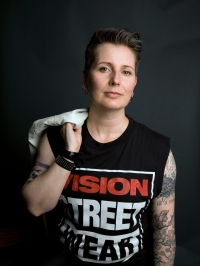 Ajax Bell is more than a pseudonym. I’m a many-faceted person, and Ajax is one of my bright sides, the one that gets words down on paper. There’s more to me: I cook and sew (neither as well as I’d like). I write (lucky accident of having to work only one job to live). Given the time and money, I’d move to Spain, walk on the beach, eat delicious food, read all day, and write all night.

My most spectacular super power? Not fitting in. I’m not so much a square peg in a round hole, but a four-dimensional object in a three-dimensional world. My stories aren’t any easier to categorize than I am. They defy genre, crossing over and back between gay lit, erotica, and coming-of-age narratives, love stories with happy endings that aren’t quite romance. That my stories are explicit and full of beautiful, smart, queer people is just wish fulfillment. I write the stories I want to read, love letters to Seattle’s past that also happen to be books predominately about gay men’s loves and friendships. Maybe some of you will like them too.

Five things you should know about me:

1. In August 1968 my lover, Tomáš, and I were trapped in an apartment as the tanks rolled into Prague during Pražské jaro. I still carry the terror of those days with me. I feared for Tomáš’s safety, for the political “crimes” the Soviets had accused him of and what would happen if they found him in Prague. We did manage to emigrate safely into the west, though Tomáš felt so guilty about abandoning his people that a year he later left me and went to help Ceauşescu in Romania. The Soviets caught up with him 1971 and presumably executed him as no one heard from him again. I still dream about him. I wonder if would have stayed in Paris with me if I’d loved him better. But perhaps Tomáš would always have loved the cause more than he loved me.

2. Carly Simon’s song “You’re so Vain” is, in fact, about me. As is Nine Inch Nails’ “Terrible Lie” and Jawbreaker’s “Want” and The Avett Brothers’ “Pretty Girl at the Airport.”

3. When I first came up with the concept of “Sweatin’ to the Oldies” I was lambasted for it. They said it would never catch on, never make any money. Indeed for moment there it looked like I was going to have to sleep with Richard Simmons to get him to participate (little known fact, Richard Simmons is straight, though I hear he likes snowballing). In the end, obviously it all worked out. I didn’t have to go down on my knees for anyone, the concept sold and everyone was happy.

4. When Whitey Ford proposed to me the first time, in 1957, I told him no. I thought he was a cheater and baseball was stupid game. He wouldn’t take no for an answer, proposed two more times and risked his life telling my daddy that I was knocked up. Whitey said he was prepared to make an honest woman out of me, just provin’ what a liar he was since I never even let him in my pants. I know he was whorin’ around on me the whole time too, I didn’t want to catch whatever his other girls might have. He played ball a while after that and I hear he was good, but I never saw or heard a game. Still don’t care about the Yankees or baseball, as far as I’m concerned all those boys are liars.

5. I was fine with Hedda Hopper until 1939 when she tried to steal my man and get me fired from my job at the studio. “The House That Fear Built” indeed, I tell you it was the house that lies and back-stabbing built. ZaSu was right call her a ferret. The good news is I’m still alive and she’s long dead. That’ll teach her to touch my man. Plus I never liked her stupid hats.