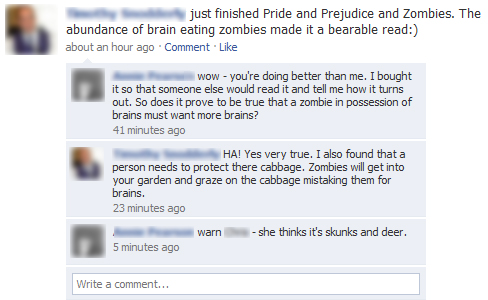 Libelle is still out of town and I am being kind of lazy on this Sunday.  Ha!  Of course even if Libelle was here, chances are I’d still be sitting around in my pajamas.  But since she is out of town, I am waiting and waiting to watch the last two episodes of Being Human.  Even though I am dying to find out what happens.

Because I needed something to watch I am watching True Blood. I am only on episode 2 of season 1.  I have clearly not at all been paying attention to mainstream media since I had no idea that this was based on the Sookie Stackhouse books. I read the first three books when they came out and in general I like vampire things (which seem really, really popular lately, is that Twilight fall out or something else?) so it seems like someone would have told me I should be watching this show.

As with any adaption it has it’s problems.  And of course the original stories themselves require a lot of suspension of disbelief (and I don’t mean just believing in vampires, but more the weird secrecy about part of it and how the rest of the world would respond to the existence of vampires).  Still it is well enough made TV to be cracky cracktastic crack.  I just wish the guy who played Bill was hotter.  Alas, they don’t yet let me cast all the TV I watch to my own specifications.  I do actually really like Sam.  And Tara.  And oddly enough, Jason.  Sookie is the epitome of a Mary-Sue, which is oddly likeable in this instance.   But maybe the thing I like best about the show so far is the credits.  They are subtly creepy and promise great things for the show.  The images are disturbing but somehow home-like as well.

Huh.  That’s a lot of words about TV.

So as I watch I have been slowly and carefully continuing to strip down my possessions.  I’ve talked about this a little here before.  I’ve been thinking about it for a long time.  Some of it is a Zen thing, some of it is just feeling sort of burdened by everything I own.  It’s not like I need to pack up and go at any moment.  No, it’s more like a few years ago I started looking at some of my stuff and feeling like I didn’t know who it belonged too.  And then, it feels weird to say, but there is such thing as too many shoes and too much clothing.  And then there’s the stuff that’s just stuff.  I have spent a good part of my weekend sorting through the tons of stuff I have just in case I need it.  And you know, some of this stuff I have literally been packing up and moving around for YEARS and still haven’t ever used any of it.  And so it goes away.  Hopefully to someone who will use it.

Of course some of the things I have way too many of are because I can’t find the right one.  Hand bags for instance, I buy one that seems good, use it for a bit and then shelve it in favor of one that might be better.  I did once find the perfect bag, but alas, when I got mugged last year it was one of the things I lost and I have not been able to find another one like it.  When my sister was here about a month ago I saw this bag and swooned over it.  It perfectly fits all my criteria.  I didn’t buy it though.  And I’ve been kind of obsessing it over it ever since.  So I guess I’ll smartly save my pennies for a few weeks and buy it. In purple.  Which is less practical, I guess than brown or black, but more me, non?  And hopefully this one wil prove to be a great as the one that got away.  Otherwise I’ll have to keep acquiring handbags.

Heh, the fact that I am sitting around in my pajamas contemplating vampires and handbags is probably a sign that I need to get out more.  Maybe I’ll go make dinner.  And then watch some more vampires…

The picture on this post is a conversation between my mom and one of my cousins.  It just cracks me up so much I had to share it with everyone.

The pink blooms are gone on the right side of the street but the white has come in on the left to keep the joy going.
Chocolate cherry. Too much time on my hands so I guess I'll fill it with eating cake since quarantine restricts sharing.
Ah found it, @loveandcrossbones (and anyone else who loves Weetzie Bat). Someday when there's many enough and no pandemic I should probably get this touched up. #weetziebat