My family's flight is still delayed in St. Louis. Ugh.  My sister was complaining on the phone, my dad says the airport there is so nice he doesn't mind staying, in fact he might just move there.  To the airport.  Yeah, I don't know either.

So everything is ready for their impending arrival, and I'm just puttering around the empty house, waiting.

My cousin Joe called me.  The whole rest of my family is at his parent's house right now drinking and being rowdy.  My aunt got the leg lamp from A Christmas Story in the family gift exchange.  She asked me if I thought she was going to hell for putting it in the Nativity. I love my family. Really a lot.

My sister just texted to tell me they made it on to a plane, but the plane has been sitting on the runway for 30 minutes and they don't know why. Ugh.  At least they are on a plane.  That makes it less likely that they will not be spending the night in St. Louis.

Here are pictures of my Shrinky Dinks from today.  The first is pre-shrinking, though unfortunately that one didn't turn out (I didn't heat it long enough and when I went to seal it the art smudged. Boo.)  The second one didn't smudge but was all warped.  I liked it anyway and I know the recipient will too (Dinos in love!) The second came out better, it's a Victorian pattern drawn on the front, shrunk, and then the back was painted red.  It actually looks really cool in real life.  Neither photographed very well.  I am very happy with my tiny dinosaurs though.  They are cute as can be. 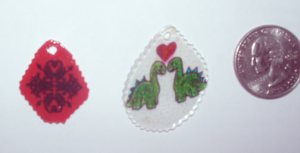 The Shrinky Dink learning curve isn't very big, so I expect to be making some damn groovy stuff out of it soon. I have an awesome idea for charm bracelets, we'll see how it goes.  I'd go to the craft store right now if it was open.  Would definitely be better than just sitting around here.

2 thoughts on “the waiting IS the hardest part”

Chocolate cherry. Too much time on my hands so I guess I'll fill it with eating cake since quarantine restricts sharing.
Ah found it, @loveandcrossbones (and anyone else who loves Weetzie Bat). Someday when there's many enough and no pandemic I should probably get this touched up. #weetziebat
I was trying to find a pic for @loveandcrossbones that shows my Weetzie Bat tattoo, which this barely does, but since I've barely dressed in more than jeans and a grubby sweatshirt for five days I felt the need to share this reminder that I was cool once.