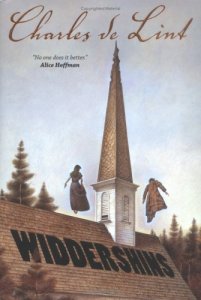 I have long been told to pick up Mr. de Lint's books.  I haven't been avoiding them or anything, I just only finally accidentally picked one up and was immediately sucked into this universe.  Here old world fairies, elves and mythical creatures have been transported to the new world with immigrants who came to our shores.  Old world myths and spirits from the native people's myths also exist.  A group of musicians and artists get pulled into a battle between the old a new world spirits causing them to be pulled back forth between worlds in an endless series of fantastical and often dangerous places. The book was a little darker than I expected, but greatly, amazingly, wonderfully enjoyable.  It is part of a series, or at least continuing stories from past characters.  Thrilling, I tell you, to know there's even more of this Newford universe out there to throw myself into.