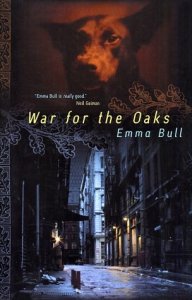 This was great urban fantasy dealio.  Fairies and elves etc. exist and come plague a rock chick in Minneapolis. It was fun and all to read, but i have to admit pretty dated.  The descriptions of the clothes were all Cyndi Lauper and Prince circa 1983.  So, yeah, I enjoyed the story, but I also learned a lesson from it.  Keep the descriptions in your own stories as timeless as possible, lest th readers of the future get their hand son it and think, "She's wearing what?!?!??" If you like the fairy magics and the madern urband fantasy bits, I rec this highly, though, despite the clothing.