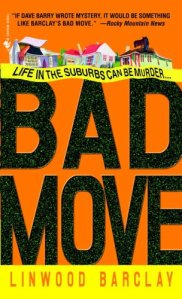 The story of a sci-fi writer who moves his family from a funky, urban neighborhood to the suburbs for their safety and then gets caught up in real estate and murder scandal.  It's fairly hilarious mostly because the main character just keeps making the worst choices possible and getting himself in deeper and deeper, but he does it in this way where it's just really human, and really male and still totally absurd.  It's a book for reading on an airplane or a day at the beach, amusing enough but fairly forgettable.