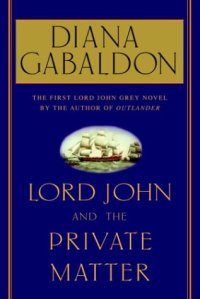 Enjoyable, very fast read.  Much better than Gabaldon's totally over blown Outlander series.  Lord John is side character in that series, appearing here as the lead.  He sets out to solve a mystery does. It's, eh, there's not much to say about it.  He's gay, the book is somewhat about that and somewhat about the whole murder mystery.  None of it done too well, but overall, as I said, a good afternoon at the beach read.  Could have done with more sex, although I suppose it's better that Gabaldon didn't try, since she generally writes heterosexual stuff and could have easily totally screwed this up.  I see when looking this up that there's actually other Lord John books out now.  If I found one laying around somewhere I would probably read it.  Don't think I'd buy it though.