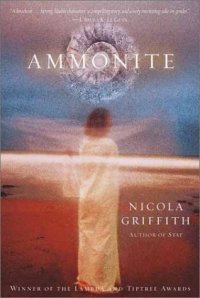 I found this right after finishing Slow River which I enjoyed so much, I snatched it right up.  Hmm.  I liked this book, but I don't know that everyone would.  It's way far out future, space SF and reads a little like those Sheri S. Tepper books, where people go to the planet which is populated by humans, presumably colonists, who have developed such a different cultural that the other federation of people or whatever, sends anthropologists to study them (except Griffith is much less pedantic and annoying than Tepper, and I like her writing style better too). In this case the planet also has a virus that kills all the men and no one can figure out how the women and continuing to reproduce without men.  Sort of feminist SF, though there's no anti-male sentiment here (like in some of Tepper's works).  It's enjoyable, but if you've read other Griffith books, this is recognizable as a first book.  I did loved it, but if you aren't already familiar with Griffith, I'd recommend the Aud Torvingen books first (The Blue Place, Stay and I think the new one is out or coming out soon in this series) which are speculative fiction (near future) noir mysteries and really awesome.